How to unclog a shower drain

Read more about the best way to unclog a shower drain here. Are you stuck? Then easily book a plumber online via Zoofy. No call-out costs! Clear prices.

How to unclog a shower drain

It is annoying when you are showering and the shower water no longer drains properly. This is a sign that the shower drain is clogged. Usually hair and shampoo and soap residues are the culprits. An unpleasant smell coming from your shower drain is also a sign of the first signs of a blockage. It is time to take action and unclog your shower drain. This will help you avoid even worse consequences, such as a clogged drain. With such a blockage, the shower water no longer drains at all. Not only can the shower cubicle overflow, the rest of the bathroom can also become flooded. With a bit of bad luck, water damage may occur. In this article, you will read all about how best to unclog a shower drain.

How do you unclog a shower drain?

If it is a simple shower drain blockage, you can usually unblock it yourself. Here are some methods you can try.

Unclog the shower drain by hand

Not always the nicest thing to do. Once you have done this not-so-fresh job, you will probably clean your shower drain more regularly in the future.
Use a screwdriver to pry the top off the drain and use your fingers to remove the hairs. Can't quite reach it? You can use a piece of wire (e.g. electrical wire) to try and remove the rest of the hairs. Bend a sort of hook at the end of the wire until you hit the blockage. Now pull the wire upwards in a sort of twisting motion. Hairs and other residues, such as soap residue, will now come along.
Immediately dispose of the clogging residue in a bucket or the waste bin and wash your hands thoroughly. 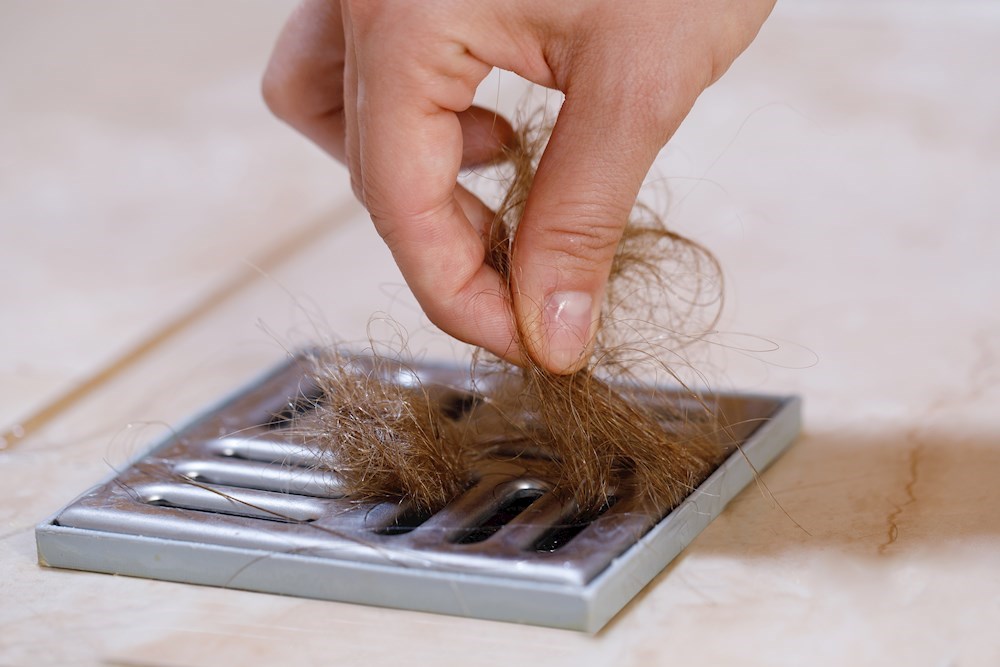 Unclogging the shower drain with a rubber squeegee

Only when you think that your shower drain is only slightly blocked can you try to use a rubber plunger to unblock it. All you need to do is remove the top of the shower drain and place the plunger over it. Move the plopper up and down with the wooden handle. The pressure will cause the blockage to loosen and disappear down the drain, allowing the shower water to flow away as normal.
If you feel that it is a more severe blockage, then please do not use this method. A severe blockage may only go deeper into the drain and cause even greater complications.

Unclog the shower drain with a drain cleaning spring

A drain unblocker can be inserted deep into the drain pipe, making it ideal for clearing blockages further down the pipe. First, roll out the unblocking spring completely. After you have removed the top of the shower drain or the drain, you can gently push the drain unblocker through the drain and try to unblock it. It is useful to have an old towel handy.

Unclogging the shower drain with a home remedy

With a bit of luck, you may have vinegar and baking soda at home. These can be used to make a quick unclogging agent that dissolves hair and soap or shampoo residues. The shower water can then be discharged as usual.
Make your own drain cleaning agent:
Mix 80 millilitres of cleaning vinegar with 50 grams of baking soda in a bucket. Be careful, the mixture will fizz.
Pour the mixture down the shower drain and leave it to soak for an hour. Then rinse the drain with warm water.
This home remedy is only suitable for slightly blocked shower drains. Should this remedy prove to be of no avail, you can still use the methods mentioned above or purchase a more powerful unblocker. Always read the instructions for the product carefully beforehand.

Prevention is better than cure

If you have succeeded in clearing your shower drain, you will naturally want to avoid a blockage in the short term. It is almost impossible to completely prevent hair and soap residues from ending up in a shower drain. However, taking the following points into account will make a big difference.
1. Remove hair from the shower drain after every shower
2. Run hot water through the drain after every shower
3. Place an (extra) grate over the shower drain. Any hair will remain on the grate and not disappear into the drain pipe.
4. Do not use excessive body products such as shampoo, soap and conditioner

You can also outsource a shower drain unblocked

Do you have two left hands or do you hate DIY? You can also leave the cleaning of a shower drain or the removal of a blockage to the professionals of Zoofy. They know their stuff and will have this job done in no time, without you having to get your hands dirty. You can quickly and easily book a professional in your area by indicating three times when you can be contacted.
Before you know it, your clog has been removed and the shower water is running fine again.
Zoofy can also help you with various other jobs. The Zoofy platform only includes professionals who score an average of 9.2 out of 10.